A popular alternative to high-interest payday loans, Earnin is an app that lets users borrow small amounts of money against their paycheck without any interest or fees. It's not available for everyone, however, and you have to give the app access to your bank account to use it.

According to Earnin, the app is an alternative to pricey payday loans, which are notorious for charging interest rates that can sometimes rise into the triple digits.

Like a payday loan, Earnin lets people tap into their future paycheck for small, short-term loans they pay back as soon as their paycheck hits their bank account. Earnin users can borrow up to $100 a day with the possibility of an increase to $500 after using the app responsibly over a period of time.

Unlike a payday loan, however, Earnin comes with no fees and zero interest. Instead, users can leave a "tip" if they choose.

However, you have to be willing to connect your bank account to the app, which is available for both Android and iOS. You must also set up direct deposit for your paycheck.

On the downside, Earnin isn't available for all types of workers. If you work multiple jobs, work as a freelancer or independent contractor, or have a position as a remote employee, you probably can't use the app.

This is because Earnin requires users to either connect their account to their employer's timesheet system or take photos of their timesheet each day and upload it to the app. Salaried workers can enable location tracking so the app receives notifications every time they go to work.

In addition, your take-home pay must be at least $4 an hour after all taxes and deductions have come out of your paycheck, and Earnin won't count tips or commissions. One exception here is Uber, which has a partnership with Earnin that lets its drivers use the app.

How does the Earnin app work?

Earnin turns the payday loan model on its head by letting users borrow against their own paychecks up to $100 a day without paying any fees. While you have the option to leave a tip, there is no obligation to leave anything.

There are some caveats and limitations, though. Here's a step by step look at how Earnin works.

To start using Earnin, you must download the app to your Android or Apple device and create a profile. You must also give Earnin access to your bank account, and you can only use the app if your paycheck is set up for direct deposit.

2. Let Earnin track when you work

Earnin must be able to verify that you're working, and its tracking methods vary depending on what kind of job you have.

When you want to borrow from yourself, Earnin will confirm that you've worked enough hours to qualify for a short-term loan up to $100. You may be able to borrow up to $500 per pay period if you make enough money and have used the app responsibly over time.

Earnin is totally free to use, which makes it unique in the world of financial services. You can choose to leave a "tip" but you don't have to, and you can continue using the app free of charge for as long as you wish.

If you decide to leave a tip, Earnin will simply deduct it along with your loan amount when you get paid.

Pros and cons of Earnin

Earnin has a lot to offer, but there are also a few drawbacks. Here's what you need to know before you sign up.

Who is Earnin best for?

Earnin is best for occasional emergencies or people who need to bridge a temporary gap in their budget before payday.

However, it's never a good idea to make payday advance loans a habit. Rather than rely on Earnin month after month, it's better to make sustainable changes in your budget or overall money management habits.

While it's important to avoid developing a dependence on Earnin or similar apps, it's still better than a payday loan.

Whereas Earnin is free to use unless you decide to leave a tip, payday loans are known for their extremely high interest rates. Payday loan interest rates are capped in some states, but in other states they can go as high as triple digits.

Users generally have positive things to say about Earnin, which has hundreds of thousands of reviews in the Google Play and Apple stores. Positive reviewers give the app high marks for its excellent customer service and ease of use. 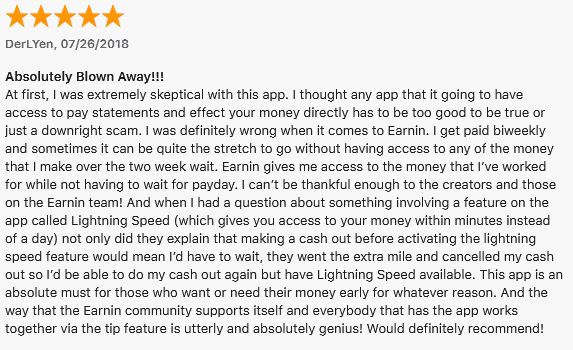 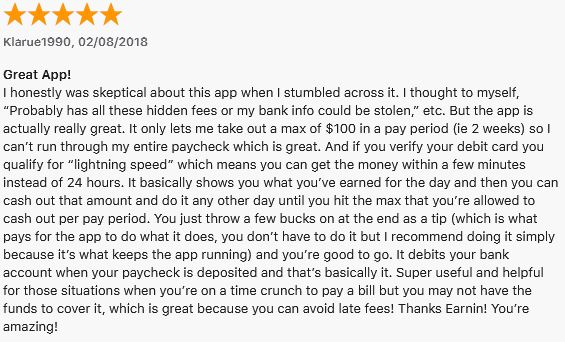 However, some users note that Earnin has its downsides. Most notably, the app isn't available for all types of workers, and it requires you to link to your bank account and prove that you've been to work.

Some reviewers also say they noticed a drop in their maximum available loan amount when they tipped less. According to Earnin, the amount a user tips has no bearing on how much they can borrow, however, this is one of the issues mentioned in the NYDFS investigation. 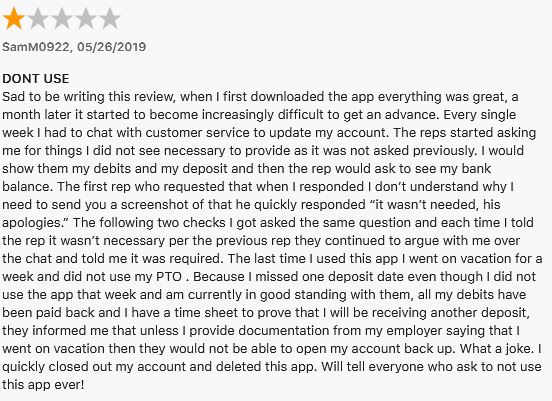 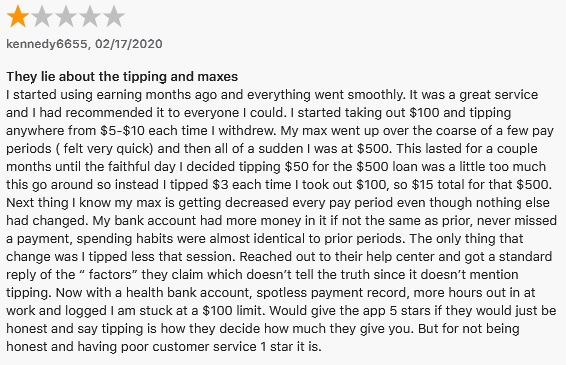 Alternatives to the Earnin app

If you need the occasional quick access to cash, there are a number of services like Earnin, each with its own pros and cons. Here are four to check out.

Dave is another payday loan app that lets you borrow up to $100 without incurring any interest or fees. Unlike Earnin, it charges a $1 a month membership fee.

One perk of Dave membership is the ability to boost your credit score. Through a partnership with LevelCredit, Dave members can have their rent payments reported to the three major credit bureaus.

Money Lion offers a few different financial services, including 0% interest cash advances up to $250. There is no fee to borrow against your paycheck, but the app gives you the option to tip.

Money Lion also offers credit builder loans up to $1,000 with interest rates ranging between 5.99% and 29.99%. According to Money Lion, over half its users saw their credit score increase by 60 points within 60 days.

Possible is only available in a handful of states, but it can be a good alternative to payday loans if you meet its borrowing criteria. In addition to living in a state it serves, you must have a regular income and link a bank account that has at least three months of deposits of $750 or more.

Users with bad credit or no credit can borrow up to $500 and pay it back in biweekly payments over eight weeks, which is longer than many of Possible's competitors. However, interest rates are high, starting around 150%.

Unlike most payday loan apps, however, Possible reports to all three major credit bureaus, so you can use your loan to improve your credit.

Opportun offers installment loans to borrowers who traditionally have a hard time qualifying for a loan. There is no credit check required, so you don't have to worry about a low credit score holding you back.

The following are some of the most frequently asked questions and answers regarding the Earnin app.

What is the catch with the Earnin app?

There is no catch to using Earnin, unless you dislike the idea of linking the app to your bank account. The app also requires you to prove that you've worked, which you can do by uploading your timesheets, linking to your employer's timesheet system, or enabling your phone's location services.

Is the Earnin app safe?

According to Earnin, it uses 256-bit encryption to protect your personal information and banking data. This is the Advanced Encryption Standard (AES) used by most banks and financial institutions.

Which banks does Earnin support?

According to Earnin, it's always adding new banks to its list, and users can check if their bank is supported from within the app. Earnin also features a list of banks it does not support on its website.

What happens if you don't pay Earnin back?

If your paycheck is late or you don't pay Earnin back for whatever reason, you won't be allowed to use the app again until you've reimbursed Earnin the money you owe.

According to its terms of service, there is "no obligation to repay" Earnin, and the company won't sue you or pursue collection against you if you fail to repay your loan.

Does Earnin hurt your credit?

Earnin states that using its app won't affect your credit, as Earnin doesn't check your credit or ask for your social security number.

Does Earnin notify your employer?

Earnin says it does not contact your employer. Your loan is processed through your bank account, so your employer never receives notice that you've used a payday advance app.

Can I close my Earnin account if I owe money?

For quick, occasional access to cash ahead of your paycheck, Earnin is a good alternative to expensive and risky payday loans. The app is convenient and free to use, but it's important to avoid relying on it too often.

Mike is a recognized credit expert and founder of Credit Takeoff. His credit advice has been featured in CNBC, Investopedia, CreditCards.com, Bankrate, Huffpost, The Simple Dollar, Reader's Digest, LendingTree, and Quickbooks. Read more.